This is probably the nerdiest post you’ll ever read on this site so strap in. (Huge thank you to Alex Handley and Jeff Cohen for collaborating w/me on this project!).

It didn’t really hit me until second semester but I realized that Civil Procedure is really just akin to a trading card game I’ve consistently and proficiently played for about 10 years: Magic The Gathering. (MTG) To test this theory, I put two of the biggest MTG nerds I know to the test – could we match MTG cards to their FRCP/U.S. Code equivalents? The results were sort of mind-blowing (at least to the non law students).

I’m going to tailor this blog post more towards those that already play and understand the mechanics of MTG, but here are some basics for the total noobs before we get into the matching:

Obviously I’m missing a ton of the mechanics and intricate game-play (please don’t flood my inbox with nerd-rage, we’re keeping it basic here) but this is enough to get you through if you’re still curious about how this all translates into lawsuits the gathering.

Matching Cards to the FRCP

The Federal Rules of Civil Procedure or “FRCP” is the lawyer’s basic rule-book for lawsuits similar to MTG’s Pocket Players’ Guide. In both cases, one simple but crucial paradigm controls: You can’t win the game if you don’t know the rules (and you have to know them cold).

We used my outlines from both semesters to pick the most interesting FRCP/MTG matches. I then explained each FRCP rule in layman’s terms to Alex and Jeff (non-law-students) and let their imaginations run wild. Some matchings are definitely a stretch and, again, I already fear for my inbox as I’m attempting to combine the two WORST communities for rules-lawyering: Magic The Gathering players and ACTUAL LAWYERS.

Remand, the card, forces an opponent to put their spell back into their hand (remanding it down the game stack) similar to remanding a case back down to the lower court. The spell isn’t destroyed as the opponent has the opportunity to try to play it again later just like a case can be “re-heard” at the lower level.

If we’re using the same logic in that remanding is putting a spell from the stack back into the opponent’s hand, then the opposite would be placing a spell directly onto the battlefield (advancing the game stack). Similarly, a case can be removed from state court (the hand) to federal court (the battlefield).

A case can be dismissed if the court hearing it does not have personal jurisdiction over one of the parties (i.e: that party has no reason to be hauled into that specific court so the court can’t “target” or enforce any judgments against him). In a way, that party in untouchable in that court. Similarly, the hexproof mechanic shields an opponent from being the target of any spells or abilities (like a spell that would attempt to destroy it). But there are other ways to avoid or get around hexproof just as you can sue your opponent in a state w/proper jurisdiction.

Rule 12 Motions (motions to have the case dismissed for the following):

A case can be dismissed for lack of subject matter jurisdiction if the parties are not “diverse” from each other (no two same state citizenship on either side of the “v.” Ex: VA, CA v. NY, DE is okay. VA, CA v. VA, NY is not.) and if the “amount in controversy” is not greater than $75k. Alter Reality changes the text of an opponent’s spell screwing up the subject matter of that spell.

See the hexproof explanation again. In MTG, some cards may target only specific colored cards (ex: remove target red card). Cerulean Wisps temporarily changes the color of a card so that it can avoid being such a target in that moment (ex: changing your red card to blue to avoid a spell that removes red cards…that red-targeting-spell would no longer have jurisdiction of your temporarily blue card!)

Not only does a court need to have subject matter jurisdiction and personal jurisdiction before it hears the case, it must also be the proper venue (or location) for that case to be heard (ex: a case that was brought to the Southern District of California when it really should be heard in the Northern District). Vintage players play super expensive decks with super rare and old cards with super broke mechanics that are typically banned out of the standard format of Magic. Bringing your hyper-expensive-totally-broken vintage deck to a standard tournament is the definition of a “dick move” (and you’ll definitely be thrown out for “improper venue”).

You try to cast a spell without properly counting up your land cards in play (mana) and realize you can’t actually play that spell and totally wiff. Compare to screwing up the content of the summons or complaint when you serve someone a lawsuit (accidentally forgetting to write the opponent’s name or the court you’re suing them in). #OOF

Almost the same thing as 12(b)(4) except here you target the summons at the wrong party (ex: serving the opponent’s minor child in hopes they’ll give the papers to their parent). Nothing is wrong with the content of the complaint, but you didn’t follow the right process to properly serve your opponent.) Similarly, trying to play a spell in magic on the wrong creature or which simply has “no valid targets” to be played on will get you in the same place (try again).

The name says it all. Counter target spell or target lawsuit.

Rule 19 will be explained later with its own card but here a suit can be dismissed if it doesn’t include a party that the court deemed necessary to also be included in the suit. Hence, return the target creature (suit) back to your “hand” (not graveyard) and try again (this time with the right parties).

12(e) (motion for a more definite statement) -> Chains of Mephistopheles

Renown for being the most poorly worded card in MTG history. Rule 12(e) allows a party to ask for a more definite statement in a complaint if it’s too vague or absolute nonsense like Chains of Mephistopheles (because how are you supposed to defend yourself against something like this?).

Rule 12(f) essentially says a court can strike a line from the pleading if its proven to be redundant, immaterial, scandalous, etc. “Censor” seemed fitting.

A defending party upon receiving the plaintiff’s complaint can respond with a general denial denying every single allegation. Counterflux overloaded counters any and all spells by opponent for that turn.

Short and sweet. Instead of denying everything in the complaint, the defending party can pick and choose allegations to specifically deny just as Counterspell can only be played on against a specific, target, spell (compare to Counterflux).

The creatures can enter the battlefield but none of their abilities (or abilities of other creatures that would be triggered by playing a spell) can do anything, hence only part of the creature is countered.

A defending party can respond to an allegation with simply the fact that they don’t have the proper knowledge to admit or deny the allegation. #IDK

Once you’ve successfully launched a suit against a party (we call this “sticking the first arrow”) you can join any other related or unrelated claims against that party to be decided all at once. Desperate Ritual allows a player to combine the text of all cards (claims) with “splice onto arcane” into one “spell” (lawsuit) to cast with one massive effect.

Rule 42 allows a judge to consolidate or separate multiple claims in a suit. Mitotic Slime reminds us for 42(b): claims can be split at the court’s discretion.

Permissive joinder of parties. Parties can join (or band together) on the Plaintiff or Defense side to fight a claim.

Misjoinder or nonjoinder. A court can add or drop a party at their own discretion (typically if you do rule 20 wrong).

Rule 14 Impleader allows a defending party to assert a claim against a
stranger to the lawsuit. (Ex: A sues B, B impleads C. If B loses, C is liable to B).

Identifies the person that must be joined in a lawsuit if feasible.

Put all the potential parties and their claims together

Must be specific – no fishing expeditions.

Protection against some privileged and confidential disclosures

26(b)(4) Use of Expert Testimony -> game mechanic: Your commander in EDH

26(c) Protective Orders -> game mechanic: Hexproof prevents a permanent from being the target of spells or abilities

Prevention of certain materials to be discovered

Rule 16/26(f) -> game mechanic: Cards on the banned/restricted list limit their play in a match. Players roll to see who goes first. Players allowed to “cut” eachother’s decks to shuffle.

Agreed upon preliminary rules and standards before discovery is initiated

Rules for mental and physical examinations

Rule 36 -> game mechanic: Player can ask how many cards are in another player’s hand or deck at any point during the match

Rule 37/Rule 11 -> game mechanic: There are several sanctions available for players that break the rules such as a game loss and being dropped from the tournament.

Sanctions for breaking the rules of discovery or general rules

No way to come back

Rule 38 Right to a Jury Trial -> Plea for Power

Judgement as as matter of law: if a party has been fully heard and judge thinks it’s reasonable that they would win their case, party can move for judge to resolve the issue immediately.

Rule 50(b) Directed Verdict -> Inside out

Judge can overrule the jury’s finding 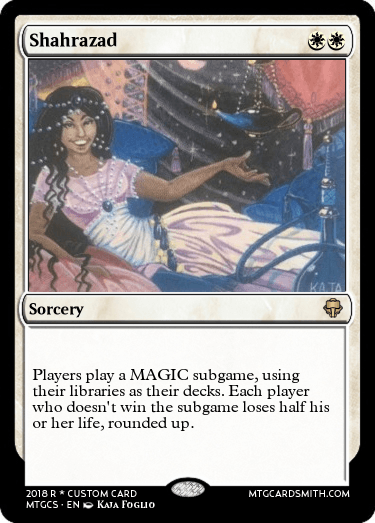 Resolve an issue mid-trial with another trial

The highest court rules all